After a delightful summer spent at home, I have returned to Istanbul for at least one more year (perhaps more, at this rate!). And in honour of my grand return, I’ve decided to shed my old skin, so to speak. That is, set myself up anew with a new apartment in a new neighborhood, so that I can make Istanbul feel even more like home.

You may recall my post from over a year ago, in which I detailed my first Istanbul apartment hunt experience. I’m here to tell you now, having just done it again, that not much has changed, and looking for a new place upon my return was just as frustrating and exhausting as it was the first time. This time, though, I was armed with a much-expanded knowledge of the city, its neighborhoods, my preferences, and what I could comfortably afford. This made the search more personal, more fun, and more enjoyable. Still frustrating and exhausting, though.

This time I was searching with my dear friend and coworker, Gaye. We had discussed living together earlier in the year, and I’m happy that no one’s plans changed and that we were able to move forward with a new space for both of us. It was also fortunate that our budgets matched well, as did our preference for neighbourhood and style, so we never had to compromise too much. She is a great roommate and friend, and her own knowledge of the city, plus her native Turkish, was extremely helpful in our search for places and interaction with realtors. I know I couldn’t have done it without her.

We started searching a few days after I arrived, and a week later had looked at easily 15 different apartments, all of which began to blur in my memory. What was most frustrating was that we saw several in which we could have envisioned ourselves living: they were functional, in decent shape, and in great locations. Still, there was always something that made one or both of us hesitate: dreary bedrooms, horrific bathrooms (I mean, how could anyone use a bathroom like these?), unadvertised expenses, and, generally, expensive for what we were getting. I had known from the start that we wouldn’t be able to move into anything new or perfect, even at the high end of our budget, but I did begin to wonder if we were expecting too much. Plus, eventually we would have to decide on something, and it was nerve-wracking to walk away from places we liked, clinging to only a tiny chance that we would eventually find a place we loved.

And after four straight days of calling emlaks, trekking through the city heat, and inspecting the innards of every mid-range apartment we could find, time was running out. It was then that, at last, we found something to love: a fourth floor walkup in the heart of Cihangir, the neighbourhood that had been our aim, and where I’ve wanted to live ever since discovering it over a year ago. And after seeing so many flats that had left us uninspired, this, the penultimate one we viewed, was a hands-down winner. It was a good price, a great location, and had a certain something that the others seemed to lack. All other potential considerations were erased.

Would we have loved it so much if it was the first thing we saw? Or if we had more time? I don’t know. But Gaye loved the paint colour and the crown moulding. I loved the open balcony and the view. We both loved the wood trim, the large windows, the incoming sea breeze, and the practical flow of the space. And after a long series of disappointments and uncertainties, we finally felt comfortable making the leap and signing a year-long contract.

Then came the really fun part: the actual move. Because the apartment was unfurnished, we had to provide everything ourselves (even appliances like a refrigerator and stove). Luckily, Gaye already owned most of these things, including furniture for the dining and lounge areas. But already having these things meant having to move these things, so we hired a moving company (read: four men and a truck) to heave the furniture, appliances, and boxes of stuff up four delightful flights of narrow, winding stairs. They were troopers. One of them even carried a washing machine by himself on his back. It was a nearly eight-hour ordeal. We bought them lunch and candy bars. 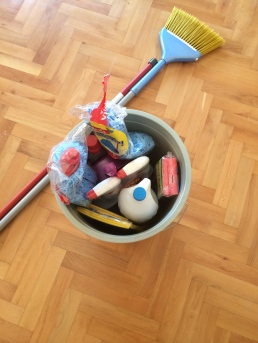 We also took a couple big trips to IKEA, as I had a bedroom to furnish, and there were other various items we needed for the apartment. For this we enlisted to help of Gaye’s keeper of a boyfriend, who carted us and our purchases back and forth, and also helped us carry them up all those darling stairs. It was an extravaganza of shopping, lifting, building, and arranging, and it took a few weeks before everything was in order. But now, I’m pleased to say, it’s over, and it really feels like home.

And, I must say, I am quite happy. It’s a smaller space than my first apartment, and I’m paying more for it, but it feels more like a home, inside and out. The neighborhood, for starters, with its many cafes, cobbled streets, and artistic community, isn’t even comparable to my former one. I feel a sense of belonging here that I never felt in Mecidiyekoy, where the stares, crowds, and hodgepodge of ugly, poorly planned buildings always made me rush to get home and eager to stay there. In Mecidiyekoy, there was never a reason to go out unless I was going to a completely different neighborhood, which, given my love for it, was usually Cihangir.

And what, exactly, makes it so special? It’s a feeling, I guess. Everyone feels at home in different places with different surroundings. Cihangir, I would say, is a neighbourhood of cats, cafes, and characters — and that’s probably what draws me to it. And really, they’re everywhere.

Let’s talk about the cats first. Like most residential areas in Istanbul, felines abound, collected into small little prides that lounge, play, sleep, and eat together. You’ll always see the same ones in the same places, true families that are as much a part of the street life as the people and cars. You actually get to know them a little, too, sort of like the guys at the corner minimarts and produce stands who are somehow always there.

And in Cihangir, the cats are well cared for. I would even go as far as to say that you’ll see as many fat cats as skinny ones, and I’m not sure there’s a street corner that doesn’t have some sort of communal water and food bowls to help sustain these fuzzy members of the local community.

There’s a little colony of kitties right outside my building, actually, who hang out under the cars and on the stairs. They look at me with curiosity, and already I know their distinct faces and behaviors, like which ones are skittish and which are friendly. Some greet me, some run, and some just stare at me with sleepy eyes. I enjoy having them there, seeing them whenever I come and go. They contribute a lively element to my quiet street, as do the many other groups I pass on a daily basis.

The door to my building, with the usual suspects. 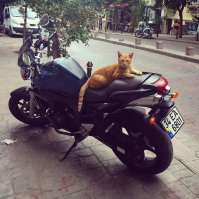 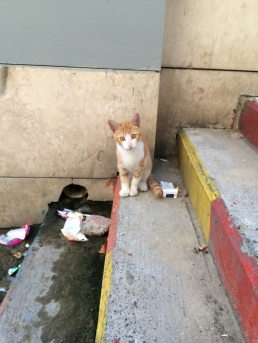 The street cats are attended to by the endearing Cat Ladies, both foreign and Turkish lovers of feline street life, who comprise just one small sect of the eccentric characters you’ll find in Cihangir. I know of one nearby cat lady, who appears to live on my corner, and who, every day at 6:00pm, emerges from her flat calling out to her neighbourhood flock. I’ve watched from on high while she divvies out food and meat for them, completely surrounded by yowling mouths who come running from all directions. She calls them by name, tells them to be nice and to share. She is clearly foreign, with wild blonde hair and a large, bosomy figure swathed in colorful, billowy robes.

Which brings me to Cihangir’s characters. Apart from the cat ladies, you have artists, actors, writers, academics, hipsters, bohemians, foreigners, and poseurs. And I’ll admit, many are a little snobby. People walk around like they own the sidewalks, and sit at cafes like they own the tables. Many are eccentric and flamboyant, with head-turning style. The community is young and open-minded, educated and artistic, stylish and non-judgmental. Perhaps that why I like it. Here there’s a certain confidence and cosmopolitan acceptance that doesn’t exist in many other places around Istanbul. It seems the people have less to care about, and they seem less interested in you. Everything is normal.

And you’ll always see these characters out and about, because they like to be seen. And the countless cafes and coffee bars provide plenty of people-watching opportunities. The cafes are almost always full, from the early morning and well into the night, with people chatting, smoking, drinking, eating, and working. You’ll see lots of people on laptops, studying, working on projects, or, like me, maybe writing lesson plans and blog posts. I take advantage of the cafe environment several times a week! 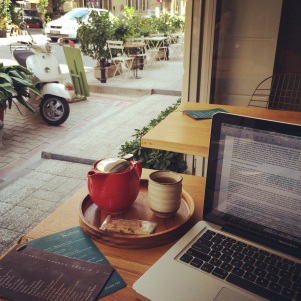 Turkish sausage with fried eggs and hot chocolate in a nearby cafe’s garden.

The cafes are adorable and plentiful, with good food and cute decor. They’re also very versatile, with many locations serving up three varied breakfast, lunch, and dinner menus, and catering to crowds from early morning to late at night. Cihangir as a whole is a famous brunch neighborhood, and every restaurant will be packed on mornings and afternoons, serving traditional Turkish breakfast plates, in addition to other delicious novelties that might set them apart from the rest. The lunch and afternoon tea crowds come next, followed by the night owls, when most of the cafes convert into bars.

These all combine to create the lively energy that makes Cihangir so deserving of my affection.  It is a place meant to be lived in, and I am so, so happy and fortunate to be able to call it home. Check out some photos of the new place and the neighbourhood! 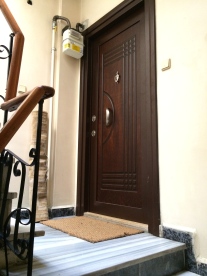 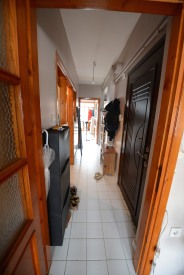 Views from the living room windows. 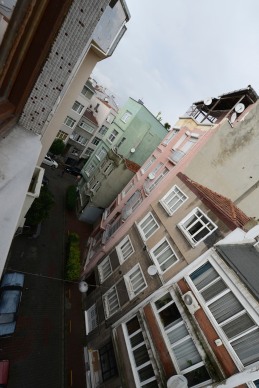 We have a tiny Bosphorus view, which even includes the Maiden’s Tower! 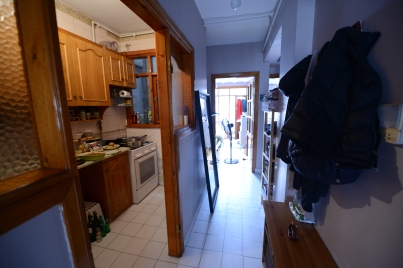 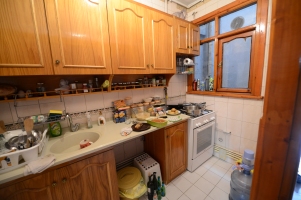 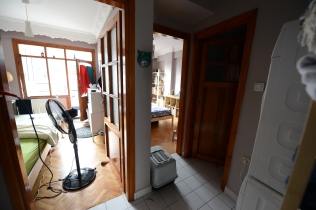 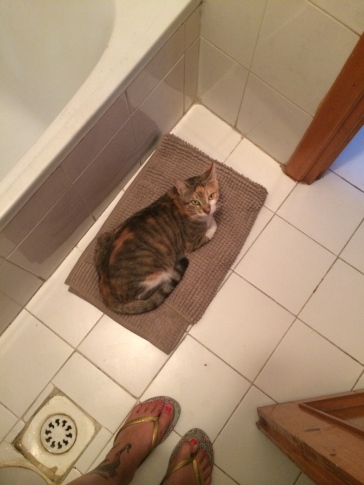 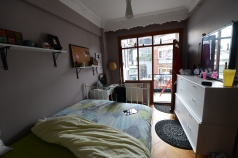 One thought on “Sara Moves to Cihangir”