Since I know you’ve all been earnestly awaiting the next chapter of my adventures, I’m thrilled to be able to deliver some good news! After several days of searching high and low (literally) in the heat of Istanbul’s sudden summer, I have at last found a place to live! I’ve been moved in for several days at this point, and I know I’ve only been here for about three weeks, but, due to certain challenges having presented themselves earlier than expected, this feels like it’s been a long time coming. It feels wonderful to have a place to call home, and I’m excited to set up and get my life going again.

As I type this and think of the best way to tell you all about apartment hunting here, I realize that, despite having spent several years living in rented spaces, going through the motions of finding a place to live is something I’ve never actually done before, which may be part of the reason it feels so strange here. In school, for example, my friends did all the work of calling realtors and setting up utilities, and I just kind of tagged along on the open houses to make sure I liked the places. Then in Cambodia, one of my program’s trainers set me up with a nice central place and all I had to do was sign some papers and pay the owner every month. My past apartments have kind of fallen into my lap, so I’ve never really experienced the grunt work that is apparently involved with looking for a place to live.

In this case I have to credit much of it to my new friend and roommate Yalda, who I met online via an expat forum where I’d been posting details of my plight: the need of a reasonably-priced, fully-furnished apartment in Istanbul as soon as humanly possible. With roommates, without roommates. In this area, or that area. None of the details really mattered to me, except that I needed a place to rent for about six months that wouldn’t make me house-poor. Being sort of clueless and without the help of a Turkish friend (you can ask my family about how my Couchsurfing relationship suddenly and irreparably curdled like sour milk), I threw all my efforts into posting plea after plea on websites dedicated to helping foreigners in Istanbul, hoping someone would be able to come forward with something promising. Most people had the same thing to say, which usually included a friendly welcome followed by a list of about three links to direct me to the Turkish Craigslist or various Turkish rental sites with listings for apartments and agents.

The rental sites were hopeless. Everything was (SURPRISE) written in Turkish, and even if there were some listings that looked okay, calling the agent (emlak) only ever resulted in an awkward back and forth that neither party understood and during which I just kept tentatively asking, “…English?”

Craigslist was somewhat easier to understand, but that (SURPRISE) really seemed to be about its only redeeming quality. A lot of posts had pictures, but when I sent emails asking for more photos or information for the listing, I’d get a response with images that were clearly from a completely different apartment. A lot of stuff was for student housing, too, with two-bedroom places that had about 10 beds crammed into whatever arrangement they would fit.

Most of the expat advice, then, had led me only to sketchy dead-ends or left me babbling nonsensically to emlaks, and after several days of searching with nothing to show for it, I got pretty discouraged. Things got tougher faster than I thought they would. I descended into a funk of loneliness and uncertainty. I felt somewhat paralyzed by my anxiety over not having a place to live. I’ve never done well living out of a suitcase without a home. I needed desperately a place I could call my own.

I spent several days checking and rechecking listings, emails, messages, and housing forums, waiting for a note that might be more helpful than, “Look on the Internet.” When I finally received Yalda’s message suggesting that we look for something together, I had nothing to lose and every possible reason to need a friend. She had lived here for two years and spoke some Turkish. Her message was genuine and she was just as pressed to find a place quickly and figured that searching for a multiple-bedroom rental would be easier and more cost-efficient. Her message was everything I wanted. I felt instantly better. We exchanged contact information, chatted on Skype, and met up that night to look at a place she’d found earlier that day.

The apartment didn’t work out, but finding someone with whom to continue searching made the process infinitely easier for both of us, particularly me, I think. Yalda was able to understand much of the Turkish websites, and she could communicate with the emlaks to ask questions and arrange appointments. We would send each other links to advertisements that might suit our needs. She made a lot of calls, managed to set up a few visits, and we commenced our search.

We dedicated entire days to looking at apartments. Of the 20-or-so emlak offices we visited and called, maybe half of them led to an open house. Sometimes we’d make our way down long and winding streets to find a cluttered little office where the emlak would tell us that the apartment had been rented or that they don’t rent to foreigners. A couple times the person who showed the properties was already out with someone else and no one was sure when he’d be back. Once, after a particularly long trek to the emlak and then to the apartment, as we stood sweating in the dreary hallway trying to open the door, it was revealed that the owner, without telling anyone, had changed the locks. For all the people and apartments we saw, I have as many stories, and while most of them are quickly told, I feel that the full scope of the adventure is best encapsulated and appreciated in the small lessons learned. For example:

“Three Bedrooms For Rent with All-New Furniture!” means “Two Bedrooms and a Living Room For Rent that Had All-New Furniture Until I Let My Friends Squat Here for a While. Also, the Random Turkish Man in the Third Bedroom is Staying”

“Great Location” means “Great for Your Glutes Because These Steep Hills Are Merciless and Infinite. Seriously, Every Outing is Like Going to the Goddamn Gym”

“Why Pay More?” means “Why Pay More for a Decent Flat When You Can Rent This Shitty One?”

Clearly nothing was so harrowing that I can’t look back and laugh, but I’ll admit that the search was a frustrating one. None of the places were all bad. There were great views, great locations, great rates, great furniture. But everything great about each place came at the cost of something else: no view (a couple places had windows opening into the concrete of the neighboring building), bad location, expensive, or damaged furniture. We could have settled and been happy, probably, but, despite our exhaustion, we persisted, and somewhere towards the end of the rope we finally found our current place.

One minute from a shopping mall. Ten minutes from a bus station AND the main metro line. A school across the street. A police station down the hill. A minimart next door. Busy streets packed with shops, restaurants, pharmacies, and groceries. Maybe that’s standard city living, but for this suburban girl, that kind of access and liveliness is pretty exciting. Even better is that we’re a short street away from the bustle, so while we’re not at all far, we’re just enough out of the way that the area feels very quiet. Inside is fully furnished and in good condition. The space is clean and comfortable. We took it right away, and signed a lease through the end of the year.

Below are some photos of the hard-earned place! Apart from that, things are going well. I’ll be back soon to talk about some general things, but in the meantime, all my love!

Looking to the right. Just around the corner is the Profilo Shopping Center.

Looking to the left. 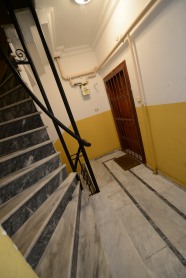 Inside the lobby. That’s our door there on the left. 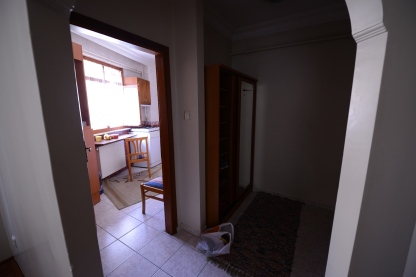 Entryway and kitchen. Behind me is the living room. 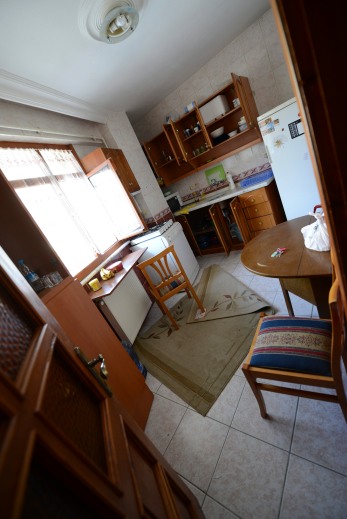 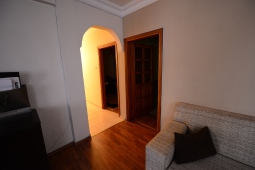 Doors to the small bedrooms. 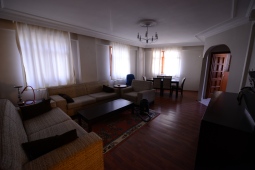 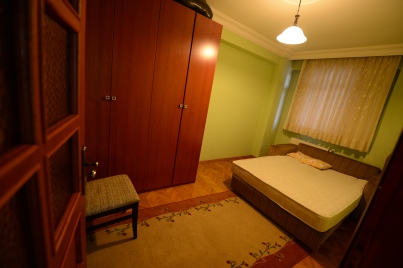 Looking the other way, towards the bathroom and the big bedroom. (All areas have since been cleaned. :))

The big bedroom. It’s mine, but I’m paying more for it.

The view out my window!