Istanbul’s Kapalıçarşı (covered market) is as vast and colorful as the city itself. It’s intimidating and fast-paced, and there’s a certain awe that consumes you when wander its streets. It’s easy to get lost, but it’s also part of the fun. Construction for what now stands as the core of the building began almost 600 years ago as a textile market. Another market was later built nearby, and the space between the two was slowly filled with other merchants and their outdoor kiosks, until eventually the entire area became dense with commerce. Today it’s filled with thousands of shops and visited by at least a quarter of a million people every day. I spent just a brief time in the belly of the beast, but I wanted to share a few photos of the place. I plan on returning shortly to do some proper shopping!

Here is one of the 17 main entrances to the fabled Grand Bazaar, where you can buy and bargain for everything imaginable: jewelry, carpets, lanterns, home goods, clothes, leather, food, spices, souvenirs, and trinkets. Most of the bazaar consists of about 60 indoor corridors lined with thousands of shops, but there’s a pretty large extension of outdoor stalls surrounding the building, too.

Just inside the doors. Supposedly there’s some method to the madness, but I’ve yet to figure it out.

Lantern stalls are everywhere, and the products are beautiful and reasonably priced. I’ll definitely be back to pick some out, if I’m ever able to choose between so many lovely things!

Hallways went on forever and then turned into more hallways. It reminded me very much of the Russian and Central Markets in Cambodia, but much more vast. I was admittedly a bit wary of descending too far into the chaos. I passed an English couple who had apparently been wandering for some time. “I’m going mad,” he said. “How in bloody hell do we get out of here?”

A more modern take on the classic lanterns.

Teas for all tastes and ailments! (Note the special Viagra mix.) 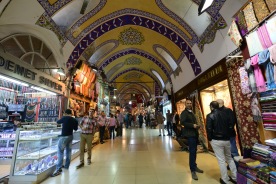 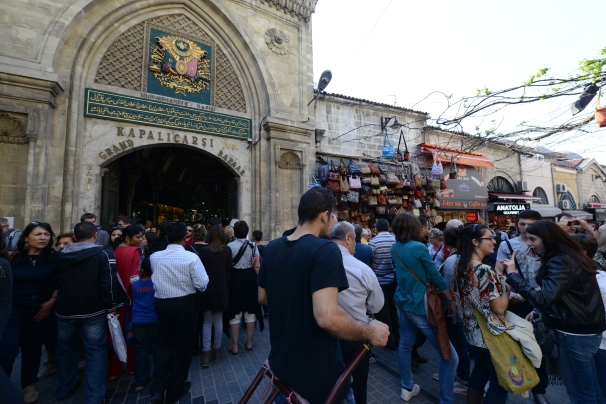 2 thoughts on “The Grand Bazaar”