Istanbul is currently in the throes of what many are calling the city’s version of an Occupy movement. I’d heard a couple days ago that demonstrators were conducting sit-ins at Taksim Square and the neighboring Gezi Park in response to new construction in the area that includes plans for yet another shopping mall, which is currently slated to take the place of the park, one of very few green spaces left in the metropolis. Demonstrations against this construction have been happening for a few days now, but when police took action this morning to dissolve them with tear gas and water cannons, violence flared, and apparently the premise has since become less about the park itself and more about the government’s recent action in general, which locals fear is becoming more authoritative by the day.

Margaret and I did not intend to witness the demonstration firsthand. We’d intended, actually, to make our way to a famous café overlooking the Golden Horn, but at some point on the commute, decided we were too tired to be very enthusiastic about it. We found ourselves at the end of Istiklal, the famous shopping street that branches off the equally famous (and recently volatile) Taksim Square. We decided we’d get some gelato and take a slow meander up to the Taksim metro to head home. For some reason, I assumed any protests were over and done.

As we walked, we noticed that several people were wearing masks to cover their nose and mouth. There was not the usual stream of backpackers and tourists meandering through the famous avenue. Many storefronts were shuttered as if closed, though some had their gates partway open with staff peering tentatively outside. Trash littered the usually pristine walkway, and we heard the occasional cheer and bursts of applause coming from further up the hill toward Taksim. Perhaps stupidly, we continued walking in that direction, thinking that whatever demonstration there was could somehow be circumvented. All we wanted was to take the metro home.

Then we heard screaming. The people in front of us began to turn and run, and within seconds there was an entire crowd swarming around us, dashing into the side streets.

In panic we fled with everyone else, but the surge appeared to have been a false alarm and soon halted. People started walking back the way they’d come, chanting and punching the air, adjusting their masks and wading back into the mass. Margaret and I collected our thoughts in stupefied silence, but we both understood that we had wandered into the midst of something passionate and spectacular, and something unlike anything either of us had seen before.

We lingered and discussed what we should do. Both of us wanted to get closer to see what was happening so we could have a better understanding, but we knew venturing any closer would be unwise. So we remained where we were, at a distance that kept us in a position of relative safety while still being able to participate.

The constant cheering, whistling, and chanting were sometimes deafening. Standing on my toes I could see the clouds of tear gas blooming above the sea of people. Even from my position many meters away, I could feel the pinch in my nose and the burn in my eyes. I managed to take a few pictures before another sudden rush bothered us enough to leave. 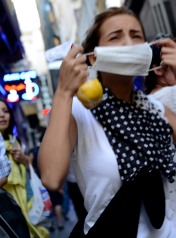 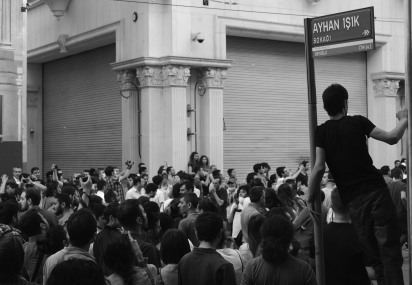 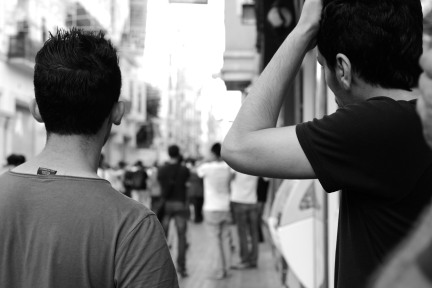 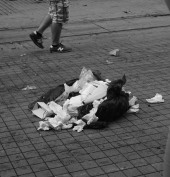 We took some side streets back to the Sishane station where we’d disembarked earlier, only, when we began to descend the stairs, found the entrance quite closed in an effort to prevent further travel to Taksim. 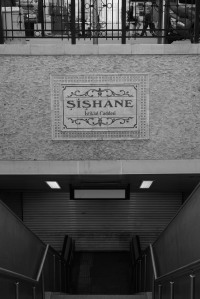 We managed to piece together a roundabout way to make it home, and the trams and buses were overloaded with people unable to take the metro. Even down by the Bosphorus we could feel the tear gas, and an acquaintance told us that everyone on the bus was talking about the demonstrations, and that everyone on their phones was telling their families to stay inside. Brutality exhibited by police is not at all uncommon here, particularly where protests are involved. Today’s events, though, seem to have struck most of the city’s residents as particularly violent and unjustified.

The government’s hand seems to move quickly here, and it seems to move against the freedom and safety and trust of its people. I do not yet feel fully equipped to comment on the full implications of this, nor do I want to generalize Turkey’s attitudes towards its government, but the locals and long-term residents to whom I’ve spoken all seem discontented, and it seems that the power and domination complex exhibited by police also stains the upper crust.

This is not the first protest Istanbul has seen since I’ve been here, nor is it the first time I’ve seen the public transportation shut down to prevent travel to a certain area. I’m also aware of police brutality occurring in my own country, but nothing to the extent of what happened in Istanbul today. I will also say, having been relatively close to the action, that not once was I ever made afraid by the people surrounding me, and so I think the actions speak more to the government than its citizens. All I witnessed from the demonstrators was passion and camaraderie and focus and heart – the elements imperative to saving and developing humanity – and their presence was only to protest and take action against what they viewed as detrimental to that.

Sometimes in the excitement of traveling and discovering a new place, it’s easy to forget that there are many people who already call this place home, and that their country and history are still living and changing. They are invested and informed in ways I am not, and to see them act on that – to try for something better – is as beautiful and inspiring as any mosque or palace or panorama. This, the present, is their culture, too, and it is electric with life and meaning. It is breathing and building now, and it is this humanity that makes me a traveler.